So it might yet survive but Elon Musk looks to have be in the process of destroying the Twitter after having purchased it for $USD 44 Billion dollars. Even if it does survive it will be in a diminished and different form.

Welcome to the Twexit!

The great beneficiary of this foot-gun is the decentralized social media powered platform Mastodon and to a lessor degree the Fediverse “an ensemble of interconnected servers that are used for web publishing, independently hosted.” (as per wikipedia)

Currently Mastodon monthly active users is up dramatical, as of November 28 2022 @mastodonusercount@bitcoinhackers.org is currently reporting 7,759,146 accounts, with +369,162 in the last week.

I joined ruby.social in May after Elon Musk offers to buy Twitter for $43 billion. 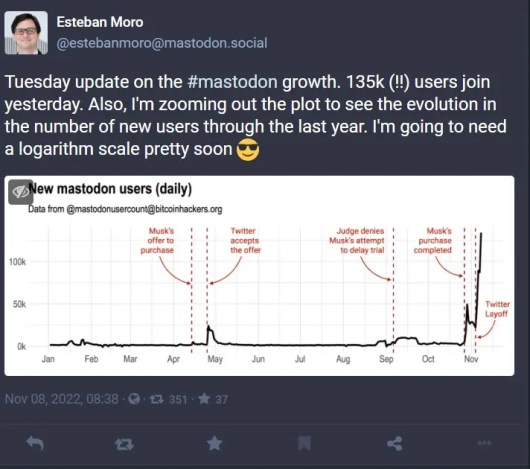 See fedi.tips for an informal, unofficial guide for non-technical people who want to use Mastodon and the wider Fediverse.

A couple of points :