A big article in the Saturday January 31st Globe and Mail Newspaper proclaimed : 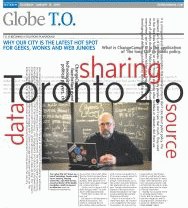 T.O. IS BECOMING A SOLUTIONS PLAYGROUND: WHY OUR CITY IS THE LATEST HOT SPOT FOR GEEKS, WONKS AND WEB JUNKIES, Toronto 2.0: data sharing source.

The focus of the article was largely on an event run at the Center for Social Innovation run last weekend call ChangeCamp, which looked at the question : “How do we re-imagine government and citizenship in the age of participation?”  ChangeCamp also go some air time on CityNews and CBC Radio’s Spark with one of the people behind ChangeCamp, Mark Kuznicki.

I was not one of the 140 people at the event but followed along in Twitter, and it looked like some good things are going to come out of that effort, include setting up ChangeCamps for other locations.  A few blog postings for more info include :

ChangeCamp re-cap: The Product is Change;
Reflections on #changecamp; Change Is Good;
Column 2: ChangeCamp;
ChangeCamp: Pulling people and creativity out of the public policy long tail;
plus lots of good summarization in BlogTo Best of ChangeCamp,
and a stream of flickr photo’s tagged with #changeCamp

Alluded to in the article is other actives going on : in December there was the spontaneous Christmas event HOHOTO which raised $25k for the Daily Food Bank; last November there was City of Toronto’s Web 2.0 Summit : Moving Towards Government 2.0 (see Torontoist’s for a summary of that, plus Mark Surman’s (also involved with ChangeCamp) keynote address); there was also a second TranistCamp which has made a impact on the (on going) redesign of the TTC (Toronto Transit Commission) web site and got written up in the Harvard Business Review: Breakthrough Ideas for 2008 : Sick Transit Gloria.

Sometimes it feels that we are overrun with Camps. Technical Companies which need developers are running “Camp-like” or (“Camp-lite”) events on evenings and weekends (like Facebook Camp Toronto 5 on the evening of Tuesday Feb 24, 2009 )

More than that, we have Geek Lunches and Developer Dim sum’s; we are have Pub Nights and HackLabs.

And this is starting to break out of the code geek circles as evidenced by the recent Toronto CupCake Camp and ScotchCamp (Okay, I need more examples here!)

Mark Evan’s responses to the G&M article is that Toronto’s Teeming Tech Scene: Good But…. that from a businesses side we have a looong way to go. (goggle ad’s only goes so far, and less so then they used too.) Which is very true. More funding for early stage and napkin stage (tech) companies is sorrily needed. But it is less needed than it used to be (joke : having done so much with so little, I’m now expected to to the impossible for free – and deliver tomorrow) , and maybe not the point.

All of this activity has evolved into a social community which goes back to the granddaddies of BarCamp and DemoCamp (I own a big THANK YOU to David Crow, Jay Goldman, Joey deVilla, Greg Wislon and Leila Boujnane for their efforts in birthing the DemoCamp phenomenon).

But I think something new is happening here. All of the various “Camps” are: open to anyone to get involved, free of fee’s, encourage and require participation . They do tend to attach a set of younger, single, coders; more likely working for small companies or startups or themselves (self-unemployed); certain technologies tend to be over represented (you know who you are). The attributes of “Camping” are not unrelated to those of Open Source Software (and/or Free Software), as well as Web 2.0 (pick a definition, any definition! – please!).

The G&M article shows they are starting to get less and less fringe and niche. If the Goverment is starting to participant – even if it is municipal goverment – then is now mainstream?

Other examples are the opposition to proposed restrictions on drivers’ licenses in Ontario, and changes to copyright rights by the Federal government, which made a difference, leading to the rise of Facebook activism.

Are the axioms of “Camping” are finding a broader expression in the culture of Toronto?

So why Toronto? Part of it might be that FaceBook and Twitter do have high penetration in Toronto. Many other of the urban areas cited have populations many times larger than T.O. Some of these activities did start elsewhere before coming here and then spreading. I’m not going to claim that we are unique in the world or in Canada. Maybe a combination of “wired” enough, individual enough, and cooperative / communitarian enough? (Richard Florida, this is your cue!)

So what is next? More “Camping”, both code and none code; delivering the goods on Gov 2.0, ChangeCamp, TransitCamp and holding the all levels of public government and agencies to their promises; fostering small companies; showing large companies. (More conferences like Mesh!)

When we make a difference in how the smaller forms of government and companies work and act, the larger forms will notice and (slowly) embrace. ( or crush us like the ants we are! 😉 ) I am very thankful it be able to watch and make a (small) contribution, here in Toronto. Lets keep building!! come on in the waters’ fine! (I’m working on a Giant Robot as we speak.)

Update : Organizer Mark Kuznicki comments on The Impact of ChangeCamp