Tales of the BunnyFish is a new exhibition for Kozyndan at West Queen West’s Magic Pony from June 28 till July 29 2007.

The bunnyfish is a unique being from a highly sentient race that has lived in the seas for many thousands of years unbeknownst to man. We have been following the exploits of one particular bunnyfish who was fished from the sea not long ago and who decided to stay topside and learn, explore, and LOVE!

From the Torontosit : Rabbit Of The Sea

my own BunnyFish Cookies picture (to eat or to cuddle?) : 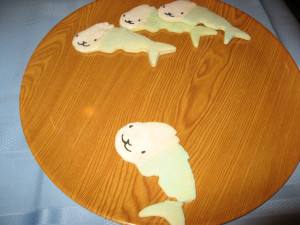