I just discovered that They (Ami & Yumi) are showing in Canada on YTV, Saturday mornings at 10:30, and were showing the last Episode of season 1 (# 16: Hungry Yumi; The Oddyguard; Song Sung Bad). Hopefully they will repeat. 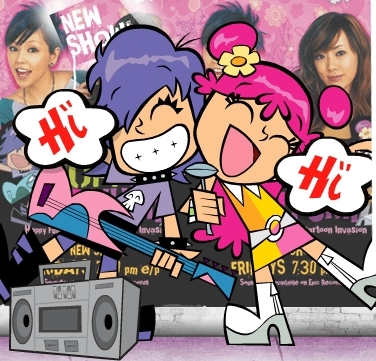 I discovered them last year November, 2004.

This is NOT a Japanese import,and nor is it anime. The cartoon is based on Ami Onuki and Yumi Yoshimura, the lead singers of the popular J-pop band, Puffy AmiYumi, with many of their catchy J-pop hits are featured on the show. They also appear in each episode, doing live-action skits in a mixture of Japanese and accented English, with songs in the original Japanese (without subtitles).

They started on the US Cartoon Network, and are a big hit there.

They only thing I seen that comes close to this it the 2004 Japanese file Kamikaze Girls, which has it’s own cartoon segments, involves a meeting of 2 girls from different worlds one: one a “Lolita,” the other a “Yankee”. The characters come off as a kind of female otaku. Kamikaze Girls began as a best-selling novel, by cult writer Novala Takemoto, was adapted into a comic and then this film (reviewed here on Midnight Eye).

One Reply to “Hi Hi Puffy AmiYumi in Canada”