We woke up Tuesday morning to reports of lane-way arson a few blocks away (Windermere Ave & Ardagh St, at 3 in the morning, very near by ) :

The first fire appears to have started near , where a skid was set on fire. The arsonist is thought to have moved westward from there, setting three vehicles ablaze. In one case, a propane tank is thought to have been thrown into one of the vehicles, which was parked in a garage in a rear lane-way.

It’s all the more disturbing because its so uncommon.

See also this from the Toronto Star , and this photo from the MetroNews (PDF) : 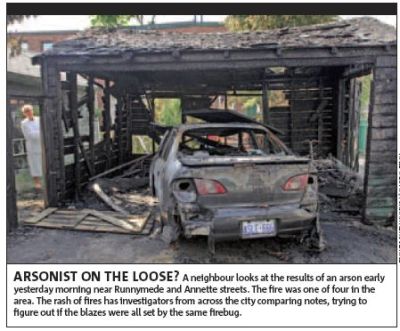