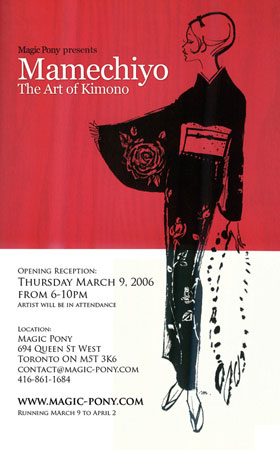 Celebrated throughout Japan for her textile design and kimono styling, Mamechiyo has only recently gained recognition in North America. ‘Mamechiyo : the Art of Kimono’ will be Mamechiyo’s first solo exhibit in North America and her first appearance in Canada.

Magic Pony is hosting the solo show of Modern Kimono, from Mar 9 – April 3, 2006, and on Thursday, March 9th from 6-10pm, the pop kimono artist Ms. Mamechiyo will be in attendance.

For more background checkout: In Japan times (from september ) Kimono Revival – if you can BugMeNot though the free registration try this pdf – (also The kimono boom), Kimonos are Hot, and the Offical Mamechiyo web site (in Japanese).

Update March 11th : The Globe and Mail had a brief story in the Saturday edtion about Miss Mamechiyo’s appearance at Magic pony entiled : The alt-kimono.