In last Sunday’s NYT Magazine there was a profile of Murakami : The Murakami Method and (Via Boing Boing) in Thursdays New York Times there is: The Murakami Influence 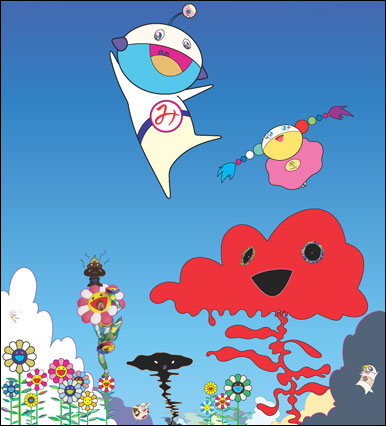 On Friday, the exhibit Little Boy: The Arts of Japan’s Exploding Subculture will open at New York’s Japan Society Gallery. Curated by superflat sensation Takashi Murakami and named after the atomic bomb dropped on Hiroshima, the exhibit explores the relationship between otaku and contemporary art. Along with exhibiting work in the gallery, the artists from Murakami’s studio have installed public artworks throughout the city.

Murakami is a modern (or post modern? – pomo) Pop Artist (like Andy Warhol and Roy Lichtenstein). Two important sub-cultures in this context is the male-oriented otaku culture, and that the female domain of kawaii. (although they are not exclusive)

Otaku (o-tah-ku): in Japan a derogatory term for a “stay-at-home person”; such as someone who has an obsession with anime, manga, video games, etc. English usage of “otaku” varies, but is mostly commonly used simply to mean a serious anime/manga fan.

Kawaii (kah-wah-ee): Cute. Often used on its own when observing a situation or character having any distinct level of cuteness. (think “Hello Kitty”) A less common, secondary meaning is “cherished, beloved.”

Update : March 8th See Bunny for a visual aid on the dangers of combining Otaku and Kawaii, or watch Sailor Moon!