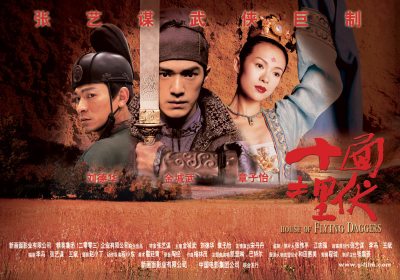 With a stronger, more focused and intimate story then “Hero” (Ying Xiong) or “Crouching Tiger, Hidden Dragon” (Wo Hu Cang Long) but just as breathtaking is the the cinematography, costumes, sets and sheer colour. Zhang Yimou has contiuned to refine his techinque since “Hero”. The cast of Takeshi Kaneshiro, Andy Lau Tak-Wah, Zhang Ziyi, Song Dandan was masterful. Lots more details @ Monkey Peaches

Sony’s North American DVD of the film is slated to release May 15th.

Anita Mui received a dedication during the closing credits. This was originally going to be Anita Mui’s final appearance in film and she had already accepted the role but, because she was battling cervical cancer, her part wasn’t going to be filmed until early 2004. After her death on 30 December 2003, director Zhang Yimou decided to alter the script rather than find a replacement. One year ago today. I suspect she was to be the new leader of the “House of Flying Daggers”.