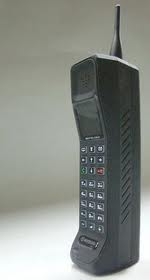 That Mobile is a trend should be a surprise to no one, but Mobile in 2011 looks a lot different from what it looked like in 2000. It’s going to look even more different in 2015. In 2000 mobile was occasionally connected very expensive Laptops (seeking the rare Wifi connection or a privileged Ethernet port) and a very few unconnected PalmPilots, and BlackBerry’s – if you were very special – for email. Now in 2010, Wifi is common and often open, Laptops are cheap, iPhones are the new norm and iPads are the lusted after device, Amazon’s Kindle E-Reader will let you read for a month without recharging, plus Android’s are a mainstream alternative for smart phones and soon -but not yet – for tablets.

But things have changed beyond the just having new devices.

Your Laptop easily has more power than your desktop did in 2000, or it’s a lot cheaper. The new Smart Devices have the power of a Laptop in 2000, at a lower price. Both of these trends have made computing much more widespread then they have ever been.

Smart Devices (Smart Phones, Pads and Tablets, touch iPods) all have capabilities that even todays Laptops do not (yet) have :

So it is now almost common to always have with you a decent GPS, Camera, and Video Phone; that you can always check something on a pocket encyclopedia or do an instant price compare; and you can play all a games or music or videos or read books all day long. And that’s without considering Augmented Reality (AR) applications that may also leverage access to information and / or processing power on the internet, that can allow for only perviously imaged applications of image and location awareness- answering questions like: where is a thai restaurant near here; It that poison ivy i just stepped in; am I having a heart attack.

So what change is this having on the all of computing?

The number of devices in the market place is changing the economics of computing. It used to be that hardware / software was done for the Military, Government or Big Business, and Consumer hardware / software was adapted from the obsolete leftovers. That has flip over to its reverse. The huge consumer market drives demand, and the Mil / Gov / Big Biz sectors of the economy adapt from the consumer marketplace or struggle to keep up with the speed of inovation. Near Field Communication (NFC) is one example of this that is about to land on the doorstep with a big thump.

Amongst the things that have changed is that the Application Store model (or App Store to use the generic slang) is changing now people find and buy their software, on all their computer planetforms. The Discoverability in the App Store is still weak, but is an vast improvement for non expert users. I expect to see the App Store model to be used soon to deploy and provision applications inside the corporation environment.

There is now also strong need to design for all of those multiple display sizes. Just when we got a handle on working with laptop and desktop monitors with sizes from 15″ to 24″, we now have to consider: Handhelds 3″ to 4″; Tablets 5″ to 7″; Pads or Slates 9″ to 11″; plus – very soon – Wall Units (what used to be called TV’s) 30″ to 70″. HTML5 + CSS3 + Javascript is the best way to fill these needs, but native apps have a place as well.

There is still lots of room at the bottom. “Feature phones” aka “Dumb phones” aka “phone that you use to make phone calls on” are still the vast majority of the market place, especially outside the “West”. The next billion devices will be used in China and India, Nigeria and Brazil. But costs for the device will have to go down dramatically to reach people not in the upper and upper middle class (in the “West” as well). iPods and Android devices are going to address this market. I’m waiting for a Android version of a touch iPod, or a Android with a voice connect and wifi only for Data, or a iPod device with Cellular Data with no voice. The One Laptop per Child (OLPC) project is also a great model for the next 1 billion of computing devices, as is ChromeBooks.  Another kind of “room at the bottom” might be single purpose devices that work with WiFi or BlueTooth that work with a smart enough phone.

Also, having a fast secure connection, means there is less need for large local storage, since you can store in the cloud and cache locally. This will happen with processing as well.

Mobile is now the default. It’s the tail that wags the Dog. Everyone will soon have some kind of connected computing device with them, always. Everything will be Mobile or Cloud (or explain why you are a special case). The expectation is to be able to access information on demand, anywhere, on any device, anytime, in a secure manner. All organizations need to rethink how they can be mobile with their customers and with their employees if they are going to be relevant over the next 10 years.