Lou’s Coffee Bar (as in Cindy Lou) @ (514 Annette :north east side side of Annette and Runnymede Road, in the west end of Toronto i.e. Bloor West Village, High Park, Malta Village, and The Junction ) is the friendly neighborhood bean shop (and my preferred “Third Place”). Friendly to dogs and new Mom’s as well. 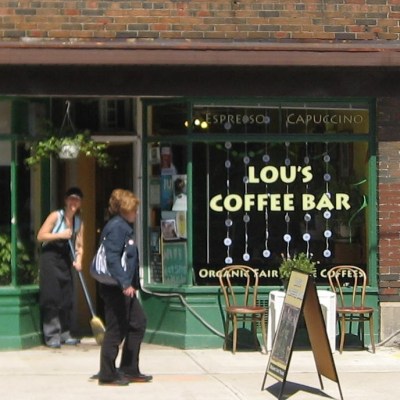 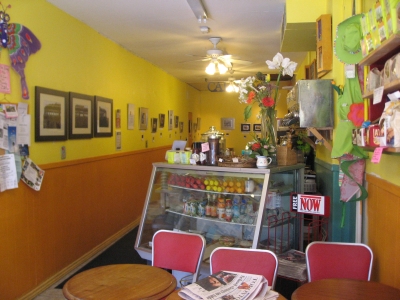 Update : Now Open, minus the sidewalk sign, Sunday Morning’s from 9 to Noon to wild enthusiasm.

On May 6 the Bloor West Villager published the story Shop owners lose sidewalk signs to city about the loss of the side walk sign visible in the first photo. I was there and saw the theft.

Update  June 6th:  For their first year anniversary they held a special event “Gems of Dzherelo : a Benefit Art Show & Sale for the Dzherelo Children’s Rehabilitation Centre in Lviv, Ukraine.” It was a great success!! here are some Flirk Photos :The crowd outsite; The Joint is Jumping; The Chris & Danica Show : Signing for the Cause

Update July 11th : The Official Lou’s Coffee Bar web site is up! and they are on Twitter (come follow allow!)