Via PhotoJunkie I came across Infest Wisely, a lo-fi sci-fi movie. 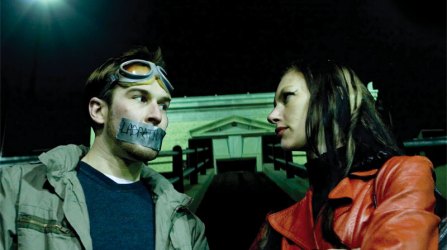 Shot in Toronto and made up of seven segments – each by a different director (Jon Sasaki, Kirby Ferguson, Craig Macnaughton,Chris McCawley, Jim Munroe, Rose Bianchini,Benny Zenga – I saw its special advance screening (for $5) at UoT’s Innis Town Hall last night (May 18th).

Wow! A great story, well told. So, What is it about? “There’s a new, chewable nanotechnology that lets you take photos with your eyes, cures cancer and eliminates body odour. But the early adopters are realizing they got extra “features” they didn’t count on. And no one told them once they spread through the bloodstream, it’s harder to uninstall than your average computer virus.” Thats the setup. They handle that and the consequences much better that anything out of the Hollywood film/television establishment.

Made for ~CAD$ 900, in 6 weeks of shooting and 9 months post production, with lots of donated labour and gear (not to mention Celtx, the open source per-production software for scripting and story boarding).

If you missed the advanced screening you can checkout the trailer, request a screening at our local neighbourhood film festival or starting May 22 watch each of the 7 episodes, one each week from the web site (or there is also a feed).

The film is under a creative commons licence : Attribution-NonCommercial-NoDerivs.

I may never go to a public washroom again, or look at a Cat quite the same way. Can I interest you in a stick of gum?

Update : The first episode Obsolete is out!

Meet Digger, a hacker whose psychological aversion to the Internets is so strong he’s turned to mugging ATMs for money.

All the episodes are out as is a BitTorrent version, a 700MB high-resolution .AVI file with XVID compression suitable for full screen viewing.

And Infest Wisely is going to have its world premiere in Las Vegas next month at Defcon 15 the underground hacker convention.

One Reply to “Infest Wisely , a lo-fi sci-fi movie. from Toronto”