“Another sort of coping takes place at the imaginative level.” 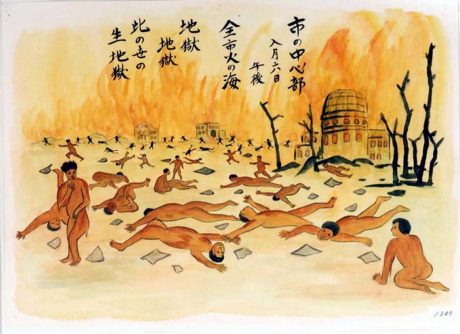 Professor of contemporary Japanese literature Ted Goossen has an eaasy in this Saturdays Globe and Mail :Japan’s literature of the apocalypse

Apocalyptic images from Japan have held us in thrall for the past two weeks: a shattering earthquake in the northeastern part of the country, followed quickly by the massive, unstoppable black wall of water that swallowed coastal settlements, and then by the chain of fiery explosions that damaged the Fukushima nuclear power plant, leaking unknown amounts of radiation into the atmosphere. Tens of thousands of people have been lost. Although Japan is used to periodic earthquakes, the scale of this tragedy is still staggering.

How do Japanese people deal with such events? I have lived in Japan for 10 of the past 40-odd years, have studied and taught its literature and culture. Yet even so, there are so many kinds of Japanese that no easy answer is possible. Certainly social cohesion, a sense of deep ties to the members of one’s immediate community, living and dead, is a factor, especially in rural areas like those hit by the tsunami. So too is a spiritual heritage, Buddhist in origin, that emphasizes the impermanence of all things, and the benefits of resignation. Japanese are hardly unemotional or stoic; they simply recognize that some things are beyond their control, and hide their feelings well.

Another sort of coping takes place at the imaginative level. Japanese literature since 1945 has gone through what we might call three stages of apocalyptic writing. The first, so-called atomic-bomb literature, was largely suppressed until the end of the American occupation in 1952, and reached its peak with the publication of Masuji Ibuse’s classic Black Rain, in 1966. Yet, like Holocaust literature, it is relevant to people at all times and in all places, including Canada, where it has inspired authors as dissimilar as Joy Kogawa and Dennis Bock.

Poet Tamiki Hara, who was in Hiroshima on that fateful day, struggled valiantly to capture the inexpressible in verses such as this:

(Translated by Geoffrey Bownas and Anthony Thwaite; from The Penguin Book of Japanese Verse)

Ibuse’s Black Rain, written two decades after the bombing, is a poetic, deeply moving novel that has special relevance to the events unfolding in Japan today. It is made up of the journal entries of an older man, his wife and their young niece, who is attempting to find a husband. Potential suitors turn away, however, when they discover the girl was exposed to the highly radioactive black rain that fell on the city after the blast. As a matter of fact, the social stigma borne by those who, either directly or through their parents, were touched by the bombings lasted for half a century, a prejudice that doubtless sharpens the fears of those who may have been exposed to the radiation from the Fukushima plant.

Whereas Ibuse’s Black Rain is reflective and understated, drawing from the rich local culture that helped the inhabitants of Hiroshima regain their bearings in a world turned topsy-turvy, examples of the second wave of apocalyptic narrative, such as Ryu Murakami’s novel Coin Locker Babies (1980) and Katsuhiro Otomo’s anime film Akira (1988), based on his manga (comic) series, portray the apocalypse as the violent cleansing of a corrupt and decultured world.

This is the dark yet gleeful symbolic revenge, as it were, of Japanese youth during an era of smug material affluence, the “bubble years,” when the system their parents had built seemed unassailable. And although the authors (and most of their audience) were born after the war, the legacy of Hiroshima and Nagasaki can be felt in the sheer power and scale of their destructive vision, as skyscrapers topple and bodies pile up on the thoroughfares of a dystopian futuristic Tokyo.

The third wave of Japanese apocalyptic literature began to build in January, 1995, when a major earthquake struck the Kobe-Osaka area, killing more than 6,000 people. Then, barely two months later, members of a religious cult called Aum Shinrikyo unleashed a sarin gas assault on the Tokyo subways, killing 11 and injuring many more. Suddenly, the idea of an apocalypse was real again. Moreover, the symbols of Japan’s heralded success – the skyscrapers, elevated highways and educated citizenry (many Aum members had advanced degrees) – were implicated in the devastation.

Kobe-bred Haruki Murakami participated in the apocalyptic boom of the 1980s with novels like Wild Sheep Chase (1982) and Hard-Boiled Wonderland and the End of the World (1985). Nevertheless, he chose to treat the effects of the subway gassings in a work of non-fiction, Underground (1997), in which he interviewed scores of victims and then, later, cult members as well.

Following that, Murakami turned his attention to the Kobe earthquake, publishing a collection of short stories, After the Quake (2000), that probed its impact on people physically far removed from the event. Yet, Murakami does so in an outwardly playful manner – Super-frog Saves Tokyo is one story’s title – though his intent is deadly serious.

What narratives will emanate from the present tragedy? The question seems trivial with hundreds of thousands homeless, and aftershocks still shaking Japan. Unlike the atomic bombings, there is no perpetrator, and thus no clear moral message other than the need to restrict or even eliminate nuclear power, a difficult task in a country with few other options. Yet new voices will and must emerge, for without them there is no way for the Japanese, and us, to deal with the engulfing walls of water and poisonously smouldering reactors that appear as if in a dream, and yet which are so terribly real.

Ted Goossen is a professor in the department of humanities of York University in the field of modern and contemporary Japanese literature. He is editor of The Oxford Book of Japanese Short Stories and has translated many Japanese writers and his is latest publication, Monkey Business, the English version of a Japanese literary magazine, is now available. (see also Monkey Business: New Voices from Japan. He is also my brother-in-law.