There has been a lot of speculation this month about Apple TV, changes that make it more than a “Hobby” for Apple, including :

We do know that Apple is holding ‘special event’ September 1st. 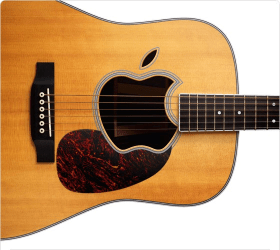 The invitation shows acoustic guitar with an apple-shaped sound hole, which has some to believe the device is wireless but I think that the Cloud based iTunes will be launched.

It is worth going over the interview with Steve Jobs at the All Things Digital conference this year in June, and in particular what he said (and didn’t) about TV (video)

Nonetheless there is lots of room to speculate about:

So there is lots of room of this to be a game changing platform.

The other 500 pound gorilla is this September’s Google TV launch, which is software (Android?) paired with existing TV Set and Box Top manufactures. The TV manufacture people have been pushing 3D, now that HD is mainstream and a “standard” HD TV set is a “reasonable” price, so they are very interesting in working with Google in order to stay relevant. And Xbox and PS3 platforms are not standing still, so if Apple wants to the center of your Home it needs to get serious.

The game is changing, and your TV is either going to change or disappear.

Update Post Sept 1:Okay I got a lot wrong (no surprise).
Whats good :
the price is USD$ 99
the hardware is very small (4″ square), with A4 chip, quiet and fan less.
AirPlay will let these stream movies, TV shows, music, and photos from iPhone, iPod touch, and iPad to an Apple TV.

the bad:
only 720p not 1028p high definition. this is probably a trade of of size vs quality size it is streaming and very limited storage.
No apps!! This is a big one. And the iOs is completely hidden under a tv interface.
No iOs device remote control
No name change. it’s still Apple TV.

Apple did a very conservative upgrade, no more than want they needed to do to keep in the game but its still a hobby. They could still allow App’s or Streaming of App’s from other iSO devices, and if you have several Apple devices the $99 price point will be tempting to get it, but it’s not going to bring people to Apple, do anything more the Roku Digital Video box does, and Google could steal a march on them here.