Last night was the 26th DemoCamp in Toronto, and the 3rd held at Ryerson University’s Ted Rogers School of Management with a crowd of ~300 or so. We are now in our 5th year (Five!!) of DemoCamps and this one felt like it retained some of the spirit of the older days.

The pre Demo activity was food catered by Liberty Noodle which was some good beef/chicken/veg with noddles/rice and it a cost effective way to grab some grub before the main event (not always the easiest thing after a busy day) – plus per-event gossiping.

The main event was a keynote and 5 quick demo’s (the current DemoCamp format):

The Keynote was a interesting and informative talk by April Dunford who related her experiences marketing with startups, and talked about customer development and product fit as it related to the Lean Startup.  (Call it Lean Marketing?) April has a summary of it up on her site at Startup Marketing 101 with links to the slides, but the really good parts were in the talk! 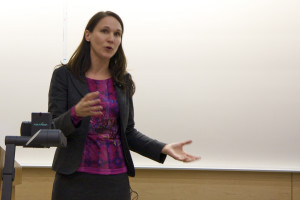 Then after a short break there where the demos :

Really cool and interesting stuff which will have a big impact in the next couple of years. Now big? Well early in that day a post come up on Read Write Web titled Cracking Facebook’s Dominance: New Cross-Network Commenting Protocol Could Be a Game Changer all about Salmon and Status.net. 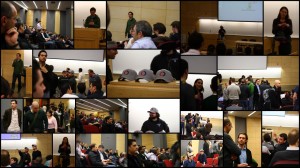 (and that was before beers and Ben’s “the Hand in the Gum” incident).

2 additional writeups to point to :
Sandy Kemsley wrote an in-depth look at OpenApps at DemoCamp 26: Easy Functional Extensions of Your Website and Ian Chan reviewed all the Demos in DemoCamp26 : What You Missed