The team from Amazon Web Services (AWS) came to Toronto (at the MaRS Building)to show us their stuff, and demo’s from some local folks showing the “what”, “where”, and “how” to their use of  AWS in real life. (no admission cost for the event. Yea!) 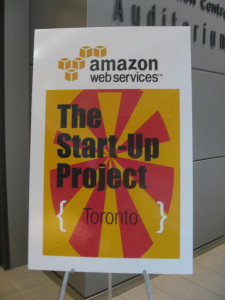 Tracy Laxdal did a great job on all the the logistics and organizing.

Prashant Sridharan and Mike Culver, the Director and Evangelist for Amazon Web Services (respectively) kicked off things with comments and a presentation giving some background to the history of AWS, where things are too today and where you can expect this to go. 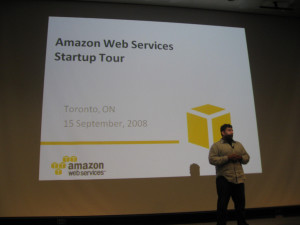 The overall focus was on the Infrastructure Services : in particular things like S3 Storage and Elastic Compute Cloud (EC2), but it did touch on the other parts (which is good because it did clarify some of them for me). 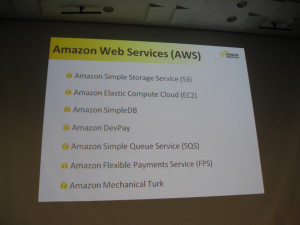 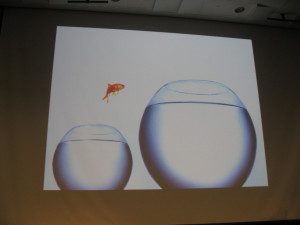 Updated Sept 18th : Amazon CTO Werner Vogels has announced that Amazon is releasing a Content Delivery Network (CDN) in Expanding The Cloud, and on the AWS blog. 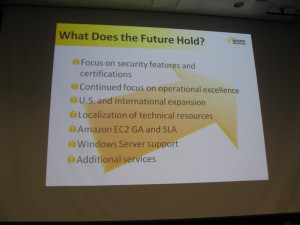 The meat of the afternoon was in  Customer Presentations :

Carlos Barrettara is from Polar Mobile, a solution for publishers and adversiters on mobile platforms which -for example -would allow BlackBerry users to receive the latest headlines, news articles, feature columns, and editorials directly from Maclean’s and Canadian Business. As a very new startup they have been able to embrace AWS from the start. 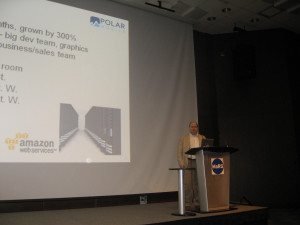 Carlos’s presentation is now on SlideShare.

Ilya Grigorik is from AideRSS, which is a site and add-on and web service which acts as an intelligent RSS assistant to allow you to focus on the most information content of the Websites and Blogs you follow in your News Readers. 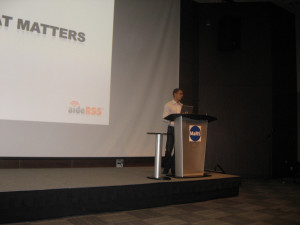 Ilya talked about how they moved (in great detail, with numbers of servers : 14 for infrastructure and 70 (!) for web crawlers) the various parts onto the AWS cloud (including using Simple Queue Service ) as they gained comfort with it. Ilya’s presentation is now on Slide Share. (also their presentation from last year)

Chris Thiessen is from Zoomii, which is bringing online the real bookstore experience of browsing bookshelves and making it an vivid experiance (SeaDragon meets Matrix meets Amazon?). 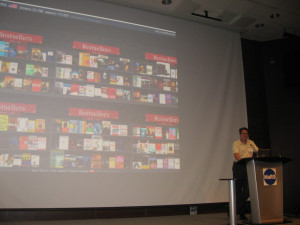 He also showed off the custom scripting he uses. We should get Chris out to a Demo Camp! Chris’s presentation is now on Slide Share.

Farhan Thawar is from I Love Rewards whom enable corporate incentive programs. 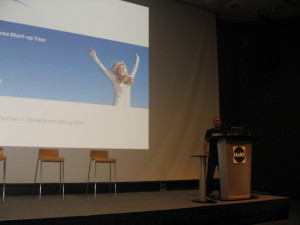 They moved from a traditional self hosting infrastructure to the amazon cloud for all but some legacy application. Given they are a Software as a Service and integrate with SalesForce (another SaaS) it made sense to embrace this style of hosting. Farhan’s presenation is now on Slide Share.

Paul Bloore from Idee talked about their newest product TinEye, (I promise I will stop call it TinyEye some day, Paul!) their image search engine that tells you where and how that image appears all over the web—even if it has been modified. 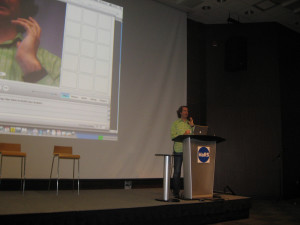 Paul talked about how they used EC2 to build a spider army to scan the web for new images, (and process the imaging matching secret sauce?) (currently at  900 million, soon to be 1Giga+! images indexed, he said in this best Doctor Evil voice.) Then he showed of a unreleased iphone app that takes a book or cd cover and uses a similar algorithm as TinEye to identify it and fetches reviews. Which caused my brain melted down ….

Okay, they they also did a Group Q&A 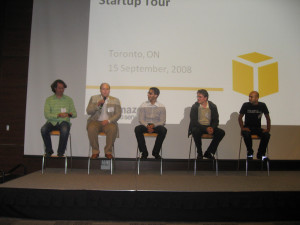 The Start-up Tour is well worth your time, and is still to come to New York City, Boston/Cambridge, London, Amsterdam and Seattle.

Some of the Presentation from last year went up on SlideShare (which uses AWS), so I hope this years will too!

Update :  34 on the Toronto presentations are now on SlideShare the startup project, plus those for other locations.

(and Hello to Mugur Marculescu of WeGif who has new take on doing animated gifs, and more, online, and is moving to AWS.  I hope the visit to Toronto was a good one!)

Now excuse me will I do some Cloud Hacking…

other posts about the amazon web services start up tour in Toronto :

and thinking about “use cases which are different form the usual uses” :

Any other suggestions come to mind?