In the Sunday NYT’s Magazine there was a piece about A Neater Way to Make a Paintball Mess and the new Spyder Electra ACS paintball gun. 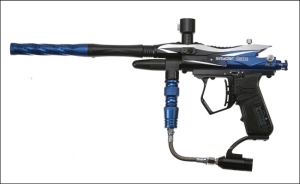 The craftsmanship behind the paintball gun was starling stunning. I also began to reflected on the Bruce Mau’s Massive Change show that recently finished at Toronto’s AGO (Art Gallery of Ontario) and the section on military spin off’s and spin on’s (spin on’s are civilian use adapted for military use).

Which lend too two wonder if paintball weapons have non-lethal military or para-military applications like crowd control (they sting!) or to delivering skin contact drugs (they sting and make you drowsy or throw up) – no to mention they made me think of the guns in Logan’s Run.