Via: Charlie’s Diary comes word that Mr. Stross has advance copies of the hard cover of his new and soon to be published novel Iron Sunrise, the sequel to his great Singularity Sky novel. 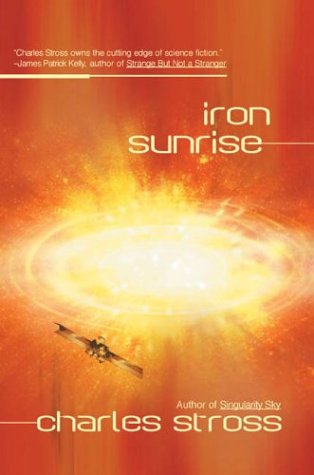 Charlie quotes the June 28’Th issue of Publisher’s Weekly which ran a starred advance review. It goes like this:

Best known for his short fiction, Stross shows that he’s a master of the novel form as well in this exciting sequel to 2003’s acclaimed Singularity Sky, serving up compelling space opera and cutting-edge tech with a tasty dash of satire. In the 24th century, a McWorld (“bland, comfortable, tolerant … boring”) called New Moscow apparently has been destroyed by trade rival New Dresden — but not before New Moscow launched its own Slower-Than-Light (STL) counterstrike: a massive ship accelerated to 80% the speed of light. The U.N., now central Earth government, knows New Dresden was set up. They need the STL’s recall code, now known only to a handful of New Moscow’s ambassadors — but someone has been systematically assassinating them. U.N. special operative Rachel Mansour and her husband, engineer Martin Springfield, must protect the last living ambassador and find out who’s really responsible for the whole mess. Stross skillfully balances suspense and humor throughout, offering readers — especially fans of Iain M. Banks and Ken MacLeod — a fascinating future that seems more than possible.

and his take on the review :

Which is not bad, for a summary that completely omits the major characters and main subplot … not to mention the talking cat sidekick.

I’ve advanced ordered the novel and I’m eagerly looking forward to it.

Singularity Sky made for compelling reading with 2 great characters, an inventive brew and mashup of technologies, and a fast moving plot line that kept you on your toes.

I particular like his solution to the problem of writing fiction placed beyond the Singularity. I think it was Vernor Vinge, who said it is impossible to write about what happens after the singularity. I see Charlie’s Stross solution to this is by applying William Gibson’s “The future is here…it’s just unevenly distributed” quote, and to explore the edges of that unevenly disturbed future narrative.

Okay, I’ve used up my quota of big words for the day.

And so while I – impatiently – wait for Iron Sunrise and then Accelerando, read this older interview for all of us who are overdosing on /.